JobKeeper 2.0, What we know so far 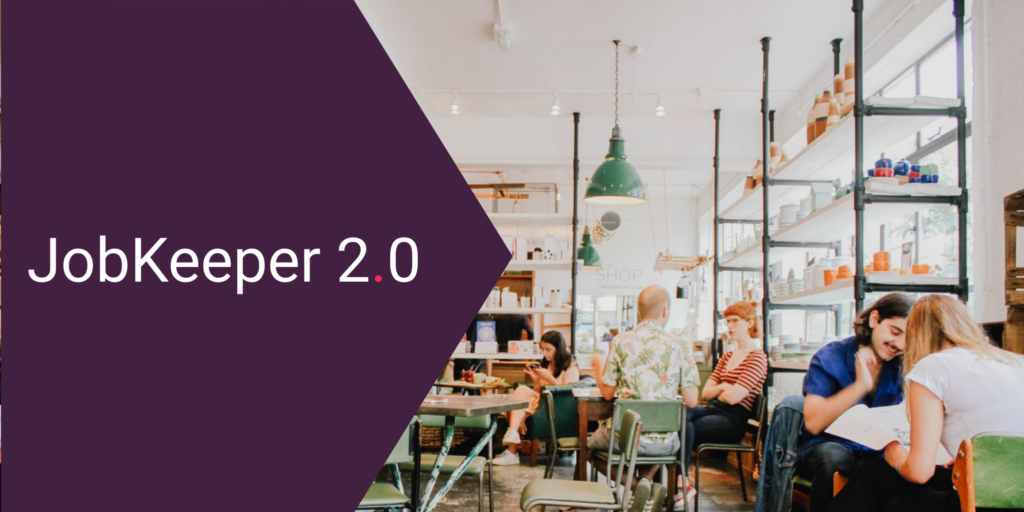 On Tuesday 21 July 2020, the Government announced changes to the JobKeeper program. While information is still being released about JobKeeper 2.0, we thought it best to summarise what we know so far. We will be sure to keep you up to date on the latest changes as and when new information is available. It’s important to note these measures have not been legislated and we are awaiting on further guidance from the Treasury and the ATO.

New turnover tests to determine eligibility will be implemented for businesses who wish to remain on the JobKeeper program past September 2020.

In addition to this, businesses are also required to demonstrate they have suffered ongoing decline in turnover using actual GST turnover, rather than projected GST turnover.

The Treasury’s information sheet released today, provides a detailed example of how the new program might work.

EXAMPLE – Provided by the Australian Government, Extension of the JobKeeper Payment Fact Sheet

Retesting turnover under the JobKeeper extension

As a monthly BAS lodger, Carmen submitted her BAS for the City Café in April, May and June. For each of these, her actual turnover was as follows:

The actual turnover decline for both the June and September 2020 quarters was still greater than 30 per cent, so City Café was eligible for the Jobkeeper Payment for the period of 28 September 2020 to 3 January 2021.

Business continued to improve for the City Café, and actual turnover for the December 2020 quarter was 20 per cent less than the December quarter 2019, so the City Cafe was no longer eligible to claim the JobKeeper for the second extension period starting from 4 January 2021

Working out the JobKeeper Payment rate to be claimed

In the scenario above, Carmen also needs to calculate how much to claim for each of her staff, and for herself as a business participant.

As Carmen was working full-time at the café herself throughout February 2020, she is entitled to claim $1,200 per fortnight from 28 September 2020 to 3 January 2021, as an eligible business participant.

She has three full-time employees who are also eligible to be paid $1,200 per fortnight because they each worked 20 hours or more per week throughout February 2020.

Carmen has an employee, Chris, who works part-time with different hours every other week: 14 hours one week; and 22 hours the next week. During the two pay fortnights prior to 1 March 2020, Chris was employed for 36 hours in each fortnight. On average, Chris worked less than 20 hours per week for City Café. Carmen is eligible to claim $750 per fortnight for Chris, from 28 September 2020 to 3 January 2021.

Cathy is an eligible employee who worked on a long-term casual basis during February 2020. To determine what rate of JobKeeper Payment to claim for Cathy, Carmen looks at pay records for the two fortnightly pay periods before 1 March 2020. She sees that Cathy was employed on average less than 20 hours per week, so Carmen claims $750 per fortnight for Cathy, from 28 September 2020 to 3 January 2021.

Carmen also started employing Charles from September 2020. Because Charles was not employed at City Café on 1 March 2020, Carmen cannot claim the JobKeeper Payment for Charles.

As previously mentioned, as information is released about JobKeeper 2.0, we will be sure to keep you up to date. Further information about how the JobKeeper Payment works is available at www.ato.gov.au/general/JobKeeper-Payment.