Understanding how the 2019-2020 budget really impacts us 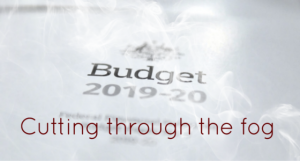 Despite being bombarded with the heavy artillery of Budget articles and commentary generated from the release of the 2019-2020 Federal Budget last night, let’s pause a moment. Budget night is not too relevant to us ordinary souls.

This little article tries to eke out the initiatives that may come to fruition.

Budget announcements must be drafted into Bills, introduced to the Parliament, pass both Houses and the scrutiny of Standing Committees, then finally be signed off by the Governor General all before they become law. Frequently this process takes years.

Once an election is called, any Bills which have not passed into legislation are prorogued (meaning legislation lapses and the process starts for the new Government).

With two Parliamentary sitting days left, it will take a getaway driver to deliver the Bills, which have bipartisan support and manage to pass both Houses, to Yarralumla for the Governor General to sign off on.

On that note, let’s breakdown what’s been announced.

The Government has undertaken to pay $75 to qualifying single people and $125 to qualifying couples as a one-off payment to assist with their energy bills. With a bit of luck, you won’t have spent it when your electricity bill comes in. Qualifying people will generally be those in receipt of Veterans’ or Social Security support.

Having put company tax cuts in place in previous years, the Government has now announced reductions for Personal taxpayers. The main changes aren’t scheduled to kick-in until the 2023 financial year so let’s not get too excited.

The instant asset write-off is to be increased to $30k and extended to businesses with an annual turnover of up to $50m. Small business have had the benefit of a $20k instant asset write-off for several years. Small businesses can claim a deduction in the year of purchasing an asset for under $20k net of GST.  It’s been an extremely popular initiative. However I wouldn’t be buying on the basis of receiving a deduction until the ink is dry on the Governor Generals signature and the legislation is in place.

Taxpayers who have borrowed from their private companies have been waiting for clarity on the treatment of those loans. After Budget night, they will have to wait a bit longer. Don’t expect any relief for loans made before 1997 which were quarantined under the current legislation. Whichever Party wins the election will be coming after those funds.

If your tax planning is based on getting your money “under the table”, you can also expect both Parties to pursue initiatives to harness the Black Economy. This Budget will force people with Australian Business Numbers to lodge tax returns (regardless of whether they have earned more than the tax-free threshold) and to update their details annually.

Extra resources have also been provided to extend the operation of the Tax Avoidance Taskforce. Employers using sham contracting arrangements to misrepresent employment relationships can expect to receive scrutiny.

Primary producers and tourism operators who are currently eligible for a refund of up to $3k in luxury car tax on 4WD and AWD vehicles, will be eligible for refunds of up to $10k on vehicles acquired after 1 July 2019. There may be some argy-bargy between the Government and the Opposition on this one with Labour touting initiatives for electric vehicles. In any case, the election will be decided before the changes are scheduled to come in.

Businesses in targeted industries will be eligible for grants of up to $4k to hire apprentices (Bakers, Bricklayers, Carpenters and Plumbers) and the Apprentices will be eligible for grants of up $2k when they hit key milestones. Teachers who work in very remote areas for four years (or the part-time equivalent) will have their HELP debt relating to their teaching qualifications waived. Don’t expect to see any legislation on this one before the next Federal election.

The above is essentially a summary of key initiatives presented by the Government in this budget. Now it’s time to wait to see what comes to fruition. Stay tuned!